There's nothing better than homemade naan and a warm bowl of curry during Fall season. There are many variations for making this at home, but I wanted to share my easy but authentic, traditional naan recipe with all of you so you can make it at home as well!

Naan is a traditional Indian flatbread that is baked inside a "tandoor" oven. Tandoors are hot clay oven, that uses charcoal or wood fire to develop heat up to 900F. In fact, it's often stuck to the inside of the oven on the sides, which then creates air pockets and bakes them to fluffy perfection. Tandoori naan gets its name from that oven, as do many other curries.

What's the difference between naan and roti? Naan needs some type of yeast or fermentation (to rise). Rotis are typically made with whole wheat flour (atta) and don't need to rise. So they're not fluffy but just as easy to make.

What's the difference between naan and pita? Pita is close to naan but doesn't use enriched ingredients - just flour, water, yeast and salt!

This easy recipe ensures fluffy delight, but I bet you'll love it for more than that.

There are so many different ways in which you can make traditional naan at home. My recipe uses flour, yogurt, and active yeast.

So, here are a few variations you might find helpful if you're following a certain diet, or don't have access to some ingredients.

These are the instructions for my base naan recipe, that uses all purpose flour, plain Greek yogurt and yeast. Where possible, I've noted substitutions for some of the other variants. You'll activate the yeast, prepare and portion the dough and cook it on a cast iron skillet.

Add warm water, sugar and yeast to a bowl and mix well together. Let it sit for 10 minutes for the yeast to do its thing. When it starts to look frothy, you can proceed to the next step. If you're not using yeast, skip this step and add some baking soda directly to the next step.

In a bowl, add all purpose flour, the yeast mixture, salt, and yogurt and mix with a wooden spoon so it all comes together. If you're not using yogurt, mix coconut milk with some vinegar and let it rest for 10 minutes before using that in place in yogurt.

Note: the dough will be sticky but it should still come together and form a ball. Don't overwork the dough. Cover it with a damp towel or cloth and let it rest for about an hour.

After an hour (and up to four hour later) - once your dough has increased significantly in size, you can punch out the air and shape the dough back into a ball on your counter. Don't knead the dough, however! Just roll it back and forth until it takes shape.

Now, portion the dough into six chunks - roughly the size of a lemon each. If you want, you can also roll the dough into a cylinder and portion them that way. Place each of the dough balls in the same bowl, cover with a towel and get your cast iron skillet going. Letting the dough rest for about 10 minutes helps it regain some of the air pockets it lost.

Once your cast iron is all set on the stove, flour your counter or working surface as well as your rolling pin (to prevent dough from sticking). Take one piece of dough and roll it into a roughly oval shape. I aim for ~¼ inch in terms of thickness (they'll puff up a bit when you put them on the skillet).

Note: Only roll one piece of dough at a time. This serves two reasons: one, it'll help keep the air pockets strong, which then leads to fluffy naan. Two, it gives enough time for the cast iron to reheat up between each naan as you're cooking it. Win-win!

Cook the naan on a cast iron skillet

As I said in the precious step, before you start rolling the dough, I suggest you heat your cast iron skillet! This way, when you're done rolling the dough, it's hot and ready to go. If you're adding any seasoning (like garlic, sesame seeds etc.) press them into one side. Then, brush a bit of water on the other side of your dough (i.e. the one without seasoning). This will help it stick to the skillet and create steam, which in turn will help the naan puff up.

Place the side with the water down on the cast iron skillet. Wait for about five seconds (bubbles will start to appear on the upper side). Now, cover the skillet and cook for about 35 seconds. Then, flip the naan to the other side and cook for 30-45 seconds. Try to press down on the naan so all the sections cook evenly. You'll see small charred spots where the "bubbles" pressed down into the cast iron. This is the mark of a great naan!

I love to brush a bit of butter (with some minced garlic) on my naan. You can also add some shredded cheese on top. Or you can add butter with chopped jalapenos to give it a spicy finish. The possibilities are endless.

Use a HOT cast iron skillet (or pizza stone)

Most of us don't have the luxury of a tandoor oven at home (I'm extremely jealous if you have one of those!) Unless you have an outdoor brick pizza oven, the next best alternative is an extremely hot cast iron skillet. I've tried making naan in a standard skillet, on stove-top and an in an oven and nothing has come close to the texture from a cast iron skillet.

You can still cook on medium heat but just wait until the skillet is super hot. Then, allow for a minute between each naan to let the skillet heat up to the ideal amount (this is also one of the reasons I recommend rolling out the naan one at a time).

If you don't have a cast iron skillet, or want to use an oven. Preheat your oven to 450F, and throw a pizza stone (preferably cast iron here too) in there. Then, you'll just need to cook the naan for 2-3 minutes once the stone is hot enough.

Roll the dough one at a time, right before you put it on the skillet

The other important thing to note here is to not overwork the dough! The fluffiness of the naan is driven by the air pockets inside, so the more you "roll" the dough, the less fluffy your naan will be. My suggestion is to gently pat down the dough and then use a roller to roll it once horizontally, and then roll it once vertically.

You can leave homemade naan out on the counter for a day or two and still be fine. However, if you have leftovers and you want to have them in the next week, you can place them in an airtight bag or container and place them in the fridge. I strongly caution against putting the dough in the fridge - it tends to get ultra sticky and it'll take a decent bit of effort to rework the dough into a usable form after that.

If you want to freeze them, just portion and place them in an airtight container and throw them in the freezer. They're good for at least 3 months. To reheat, I suggest sprinkling a TINY bit of water on the surface - then you can microwave it, or warm them on any pan. If you're reheating frozen naan, make sure to let them thaw to room temperature first. To keep naan warm for a party, I suggest placing them in an oven at 200F.

For more Indian recipes check out the following:

Did you make this recipe?! ⭐⭐⭐⭐⭐
Please leave a comment and a star rating and let me know how it went! We love hearing from you, thank you so much 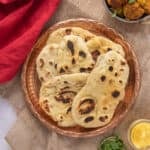 Note: This recipe was originally published on August 23, 2020 and was updated on November 20, 2020 with additional tips and photos for easy instructions