The best kale salad was inspired by Il Corvo, Seattle - and has pecorino cheese, toasted pepitas, and a green, garlic confit dressing for a fresh hit of deliciousness!
Jump to Recipe Pin Recipe

I've been dying to write this for a year now. Il Corvo is one of my all-time favorite restaurants in Seattle. This charming little restaurant is located off Pioneer Square and is only open for lunch. I've never had a pasta dish at Il Corvo that I didn't like. But there are two other showstoppers that deserve their own applause - the focaccia (to die for!) and the star of this post, the best kale salad ever, aka the salad for people who hate salads.

I used to go to Il Corvo just for the salad. Eventually, as one does, I started noticing the ingredients separate from the salad. I figured they used pecorino cheese right off the bat. The nuts threw me for a loop - originally thought they were pine nuts, but had an "aha moment" and realized they were likely pepitas. I could tell that there was parsley and garlic in the dressing. And then, one day, I overheard that they use garlic confit in their salad dressing! Armed with this knowledge, I was ready to develop my version of a delightful green salad dressing and the best kale salad!

Disclaimer: This salad is inspired by Il Corvo. Other than the one tidbit about confit garlic, I have no idea what their actual recipe is. That said, it does taste damn delicious, so here we are. Now, onward and upward!

Squash and pumpkin are in season right now, so if you're using squash for a different recipe (like my Thai butternut squash soup) you can use whatever seeds you have on hand. Or, you can also substitute with store-bought pepitas (pumpkin seeds) or pine nuts or even sunflower seeds. The idea is to add a bit of crunch to the salad. I typically just dry roast them on a pan for 2-3 minutes on a medium flame. Then they're good to go.

? How do you chop and prep kale? How to keep it soft but crunchy?

Kale is actually a type of cabbage so it needs to be chopped pretty finely or shred the kale into small, bite-sized chunks (or buy shredded kale). Then add a tablespoon of olive oil and slowly just massage the kale by rubbing as many pieces as you can to soften it. Then, set the kale aside while you prepare the dressing to get soft yet crunchy kale for your salad.

♨️ What's confit garlic? How do you poach garlic?

This is a play on duck confit (i.e. cooking duck in it's own fat). Garlic + olive oil = garlic confit. It's also a tremendously versatile dish on it's own. When garlic is in season in the summer, I typically make a large batch of this, and then serve it on EVERYTHING. And the great thing is that you can use the oil for roasting or sautéing like you would normally use olive oil and then, you can also mash up the garlic and use it as a spread or dressing.

How do you make green goddess salad dressing?

Once you poach the garlic, as described in the step above, you then take the garlic cloves, along with some of the olive oil, parsley, apple cider vinegar, lemon juice, and pecorino cheese and pulse it all together in a food processor. The resulting dressing should be fluid, but not entirely soft - some coarseness will remain due to the parsley and cheese. Taste and adjust as you see fit - more parsley to make it extra herbaceous; add some olive oil to make it more fluid; or add more cheese to make it more cheesy!

How do you store kale?

Kale is one of those greens that tends to just wilt up when you put it in the fridge. I know, I hate it too. I follow a three-step process which drastically improves the life of kale.

If all else fails, just make some delicious, creamy vegan kale pesto with it. You won't regret it, I promise! 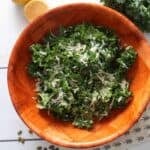 For the green salad dressing: