Latkes are traditionally these pan-fried potato pancakes, typically made with onions and eggs. When we decided to host an impromptu brunch on MLK Day, I decided I wanted to make some crispy latkes. That said, I've been on a weight watching adventure recently (i.e. my pre-engagement diet) and I also only had a single potato in the house. So, not really the most ideal set-up for a dish where most recipes call for at least a couple of grated potatoes. However, I found a half bag of Brussels sprouts in the fridge, and voila, here we are!

So, what's the scoop on these crispy latkes?

Latkes are typically made with grated potatoes, onions, eggs, and something to bind all of them together (like bread crumbs). They're shaped into nice patties and pan-fried in a neutral flavored oil. These latkes are a bit healthier, and use shaved Brussels sprouts mixed in with one grated potato and some onions. Delicious!

How do you shave Brussel sprouts?

I've seen shaved Brussels sprouts at the grocery store. But if you have a food processor, it's super easy to make it yourself. Just chop off the edges of the Brussels sprouts and throw them into the processor. Pulse a couple of times until you get them finely shaved. Fun tip - I typically make this on Sundays and use it as a salad base through the week!

What type of potatoes do you use to make these crispy latkes?

My Jewish friends often use Russet potatoes - one of them said it reminded her of her grandmother's latkes. Russet potatoes also have a high starch content, so they fry quite nicely to give you a crispy exterior. But since these latkes are made with Brussels sprouts mixed in, you can use whatever potato you have on hand - I used a Yukon Gold, and it tasted just as delicious!

What do you eat these latkes with?

I've been told that traditionally, latkes are served with sour cream and apple sauce. In the spirit of keeping this diet friendly, and as a nod to the tradition, I made an avocado crema as a dipping sauce. Two avocados, three tablespoons of sour cream, and a good squeeze of lemon. Creamy to go with crispy! 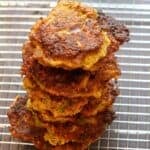 Print Recipe
No ratings yet

For the avocado crema:

Tried this recipe?Tag @urbanfarmie or #urbanfarmie to let me know – I would LOVE to see your creations!
« Healthy Pistachio Muffins (with Bananas & Matcha!)
Thai Curried Butternut Squash Soup »