Carciofi alla Giudia, or Roman-Jewish fried artichokes are really one of the early dishes that pushed this vegetable into popularity. When I lived in Rome, I learned about the Jewish Ghetto (Rione Sant'Angelo) of the 1500s, where people improvised to cook on open fires. The whole fried artichokes were born as a result of this scarcity and improvisation.

The Italian version of this dish, fried whole, is made with Romanesco artichokes (which are purple). Artichokes in the US are mostly "globe" artichokes. This air fryer artichoke recipe tries to replicate the original texture by roasting them as halves instead of the whole. I love serving this with another Roman favorite - authentic cacio e pepe.

You'll need a whole artichoke, avocado oil, salt, pepper, and lemons for this recipe. You can also add seasoning (e.g., garlic powder, cayenne, or even garam masala for a warm cultural twist!)

How to pick artichokes

There are three simple rules I follow when picking artichokes:

"What parts of the artichoke can I eat?" is the most common question I get asked about artichokes. So, I've outlined the basic parts below, and have detailed instructions to show you how you can get from what you see to the parts you can actually use.

Note: A substantial part of the artichoke is typically inedible (for instance, most of the outer leaves, and a good portion of the upper parts that are more prickly). So, if you get to retain a third of the artichoke (mainly the soft leaves, heart, and a part of the stem) - you're in good shape.

Artichokes are like avocados - exposure to air will usually turn them brown. So, before you start preparing your artichokes, cut a lemon into halves, squeeze the juice into a bowl of ice water, and then drop the wedge into the bowl. Set this aside - once the artichokes are prepared, you'll want to rub it with lemon juice and then drop it into this bowl to preserve it's rich green color!

Typically I shoot for where the leaves are "white" that's the soft part that's edible. Once you slice the artichoke, you'll see the inner purple leaves exposed too!

Parboil, then season the artichokes

You're mostly done with the process! Preheat your air fryer to 375F if you need to at this stage.

Throw in the air fryer!

Now, place the artichokes with the flat side down on the basket or tray of your air fryer. I typically finish off with a little more avocado oil on the top, or a spritz of avocado oil spray if you have some on hand. Roast for about 10 to 15 minutes, checking every minute after the 10 minute mark.

The time it takes will really depend on the size of the artichoke, but I find that it takes around 12 minutes for a perfect "fry" on mine!

Serve the roasted air fryer artichokes with your favorite creamy dipping sauce. I love to use a basil mayo or mayo with lemon zest!

How do you eat artichokes?

You can eat the inner leaves and hearts whole! Depending on where you cut the top off, some parts of the leaves are less soft. For those, I scrape the fleshy part with my teeth. To do this, pick up a leaf, put it between your front teeth and pull it out to scrape the underside.

What can you eat with air fryer artichokes?

I love making a basil aioli with mayonnaise and basil, garlic, and lemon zest to serve with this artichoke. You can also just drizzle some lemon juice and eat it as it is.

I've never had leftover artichokes when I make it this way. But it stays okay in the fridge for a day. Just make sure to throw it in the oven or air fryer to reheat and not the microwave!

If you like this recipe, don't forget to try out my other spring recipes:

Did you make this recipe?! ⭐⭐⭐⭐⭐
Please leave a comment and a star rating and let me know how it went! We love hearing from you, thank you so much 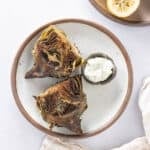 Step-by-step instructions with photographs are in the main body of the post - so please make sure to refer to those if you have trouble following along!