Do you love fresh cherries? If so, you're in luck! Learn about the different types, when they are in season, tips on how to pit and store your cherries, and some great recipes that you can try! Whether you're looking for information on cherry harvest season or recipes with this delicious fruit, you've come to the right place!

This post contains helpful tips and tricks! If you're in a rush, please use the table of contents above.

Cherries can broadly be grouped into two categories: sweet cherries and sour cherries.

These are the most popular type of cherries. They are large and have a sweet, sometimes slightly tart flavor. Sweet cherries are usually eaten fresh, but can also be used in pies, jams, and other desserts. Sweet cherry production is from different parts of the world, including Europe, North America, and Asia. The season for sweet cherries usually runs from late May to July.

Here are some varieties of sweet cherries that you may find at store shelves in your local grocery store or farmer’s markets.

These deep red cherries are a cultivar of sweet cherry from the Pacific Northwest (specifically, Milwaukie, Oregon). Bing cherries are the most popular type of sweet cherries, and have a high sugar content and are often used in pies and other desserts.

They are grown all along the West Coast of North America - from Oregon, Washington, and California to Wisconsin and British Columbia (in Canada). They are available in the stores from May to late August.

Rainier Cherries a sweet cherry variety usually grown in my home state of Washington! They're named after Mount Rainier. Rainier cherries are known for their sweet taste and bright red color. If you are looking for a delicious and healthy snack, rainier cherries are a great option!

Rainier cherries are in season from May through June in California, and June through August in Washington. I found out recently that this is because it takes a while longer for the cherries to ripen in Washington (which tends to be a tad bit colder than most parts of California!)

Chelan Cherries are a type of cherry that is also grown in Washington (we really are the cherry capital!) P.S., fun fact (not that you care to know about this) but I had my bachelorette in Chelan, Washington, last year and we must have eaten a truckload of these cherries. They're a hybrid of two other types of cherries (Stella and Beaulieu varieties).

They're quite popular for their sweetness and juiciness. When choosing Chelan cherries, you'll want to pick ones that are firm, plump, and have a deep red color and avoid cherries that are soft, bruised, or have brown spots. Chelan Cherries can be eaten fresh, used in recipes, or frozen for later use.

The season for Chelan cherries is typically from May to mid-June - they tend to ripen a few weeks before Bing cherries do.

Sour cherries are a type of tart cherries. They are usually grown in the northern parts of the United States, as well as in some areas of Canada and Europe. The season for fresh sour cherries is typically from June to August.

Sour cherries have a higher acidity than sweet cherries, which makes them perfect for baking and cooking. They are also used to make cherry pie fillings, jams, and other preserves. The harvesting period for sour cherries is more limited, and they don't travel as well as sweet cherries. That's why you'd often find them sold frozen or in cans.

Montmorency Cherries are usually grown in the United States. They have a taste that is both tart and sweet. These cherries taste great in pies, cobblers, and other desserts. They can also be used in savory dishes like chicken or pork. Montmorency cherries are a great addition to any meal.

These types of cherries are usually grown in warm climates. The season to harvest these cherries is typically from late spring to early summer. Special Cherry Types are a popular choice for many because of their sweetness and versatility. They can be used in pies, jams, or simply eaten fresh.

We use two special types of cherries often in my household.

My favorite brand is the original manufacturer of Maraschino cherries and sometimes, when we want to host dinner parties where we expect to use a lot of them (e.g., in cocktails) we usually get a larger 105 oz can of these delights! One can never have too many.

Amarena cherry is a  cultivar of the sour cherry. The Amarena is a small, dark-colored fruit with a very intense flavor. Amarena cherries are grown in the northern regions of Italy, as well as in some parts of Switzerland and Austria.

The season for Amarena cherries is from June to August. They are usually in syrup form in a bottle.  Amarena cherries are commonly used as a topping for gelato, as well as for other desserts such as cakes and pies. You can get these online as well, and they come in cute little jars!

Dried Cherries are a fruit that is dried and then can be eaten as is, or used in recipes. They are usually grown in Washington state, and the season to harvest them is typically from June to September.

It is a healthy snack because they are low in calories and fat, and high in fiber. When dried cherries are in season, they are typically less expensive and you can find dried cherries in the dried fruit aisle of most grocery stores.

When Is Cherry Season by State?

If you're wondering when cherries are in season in your state, here is a table showing the state and peak cherry season. Just Ctrl + F to find yours!

How long do picked cherries last?

Picking cherries is a seasonal activity that generally only lasts a few weeks. Cherries often don't last long after being picked - typically, 5-7 days if kept in the fridge, but this can be extended to around two weeks if they are stored in a cool place like a cellar.

What month does cherry season start?

Cherry picking season typically starts in the mid of April and lasts until July. However, the specific dates can vary depending on various factors such as weather conditions, location, and the types of cherries that you are growing.

What month is best for cherry picking?

When you start seeing cherry blossoms, it's time to start thinking about cherry picking! The best cherry-picking season depends on the type of cherry that you have, but typically, it is best picked from the beginning of June until July.

Where do cherries grow in the USA?

More than 300 million pounds of cherries are grown in the United States each year. Cherries are widely cultivated in the Northwest and in Michigan. Other states with large commercial cherry production include California, Pennsylvania, New York, and Oregon.

How to Pit Cherries

You can't really talk this much about cherries without talking about how to pit them. As much as I love cherries, I don't love pitting them manually. I love using this cherry pitter than can pit multiple cherries at once (and also own this single cherry pitter).

However, if you don't have one of those handy, here's a quick and easy guide on how to pit cherries by hand.

First, wash your cherries. You don't want any extra dirt or bacteria on them. Next, take your knife and cut the cherries in half. You can do this by cutting around the stem.

Once they're cut in half, twist the two halves in opposite directions to separate them. If the pit doesn't come out easily, you can use the tip of your knife to help pry it out. Finally, put the pitted cherries in your bowl or plate and enjoy!

How to Store Cherries

Cherries are best when eaten fresh, but they can also be stored for later. If you need to store them, put the cherries in a plastic bag and store them in the fridge. Eat them within a week for the best flavor.

You can also freeze cherries. Wash and pit the cherries, then spread them on a baking sheet and freeze them. Once they're frozen, put them in a freezer bag. Frozen cherries will last for several months.

Dried cherries are another option for storage. You can buy them already dried, or you can make your own. To dry cherries at home, wash and pit them, then slice them in half. Place them on a baking sheet lined with parchment paper and put them in the oven on the lowest setting. Check on them every few hours, and once they're dry, store them in a jar or container. Dried cherries will last for several months.

I don't know about you, but I love cherries. Sweet, sour, or in between - I'll take them any way I can get them. And luckily for all of us cherry lovers out there, there are a million and one recipes that use this delicious fruit. Check out some of my favorites below! 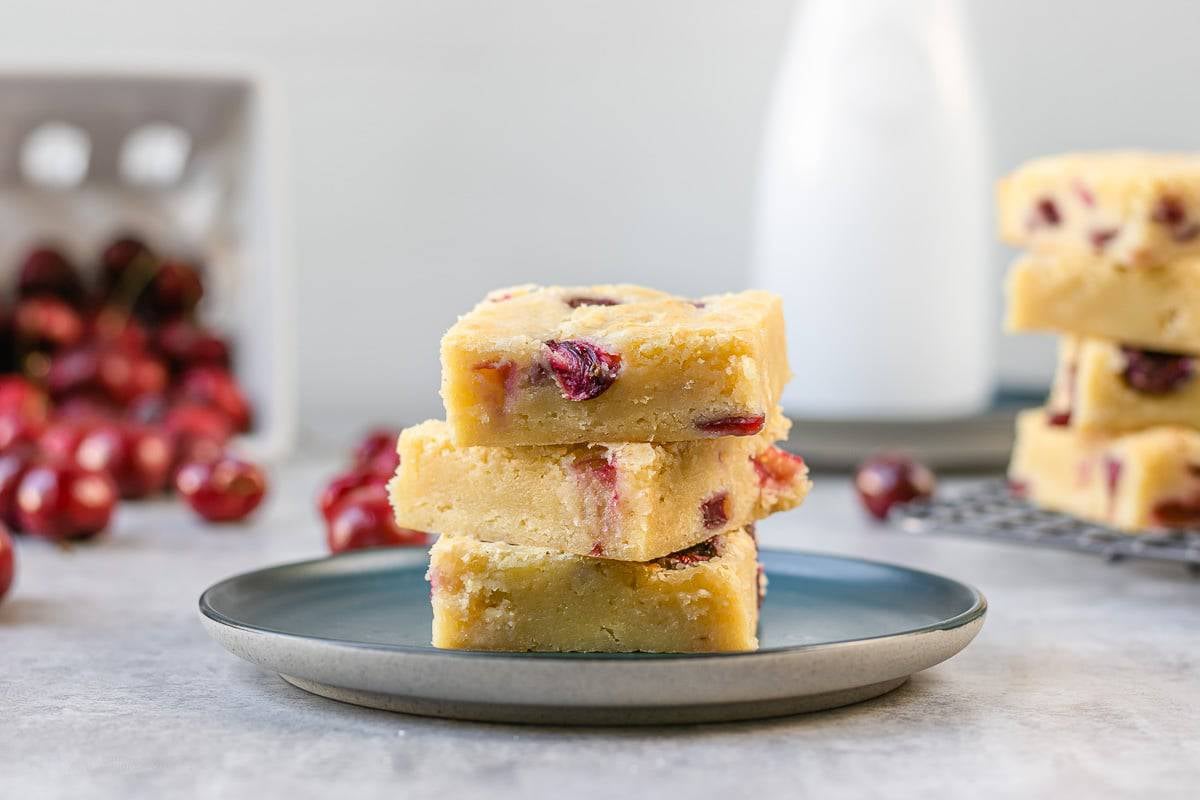 These Brandied Cherries are a delicious alcoholic treat! Fresh cherry fruit soaked in a sweet brandy syrup. Use as a cocktail garnish or a condiment on dessert like ice cream.
Cherry Tart Recipe
Sweet Cherry Cobbler 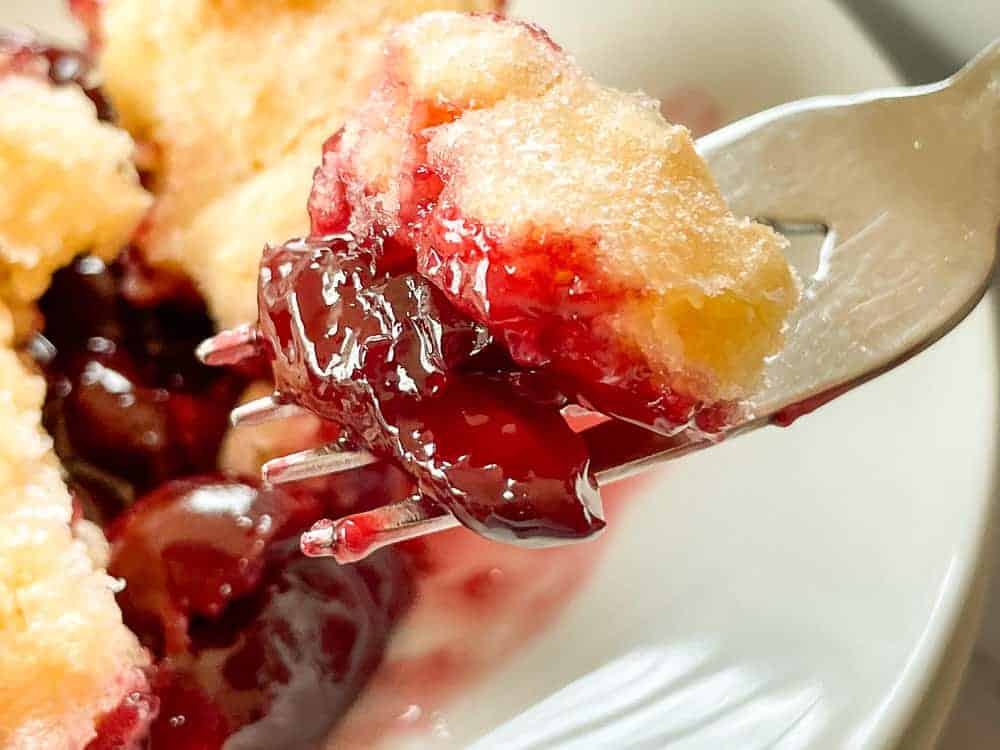 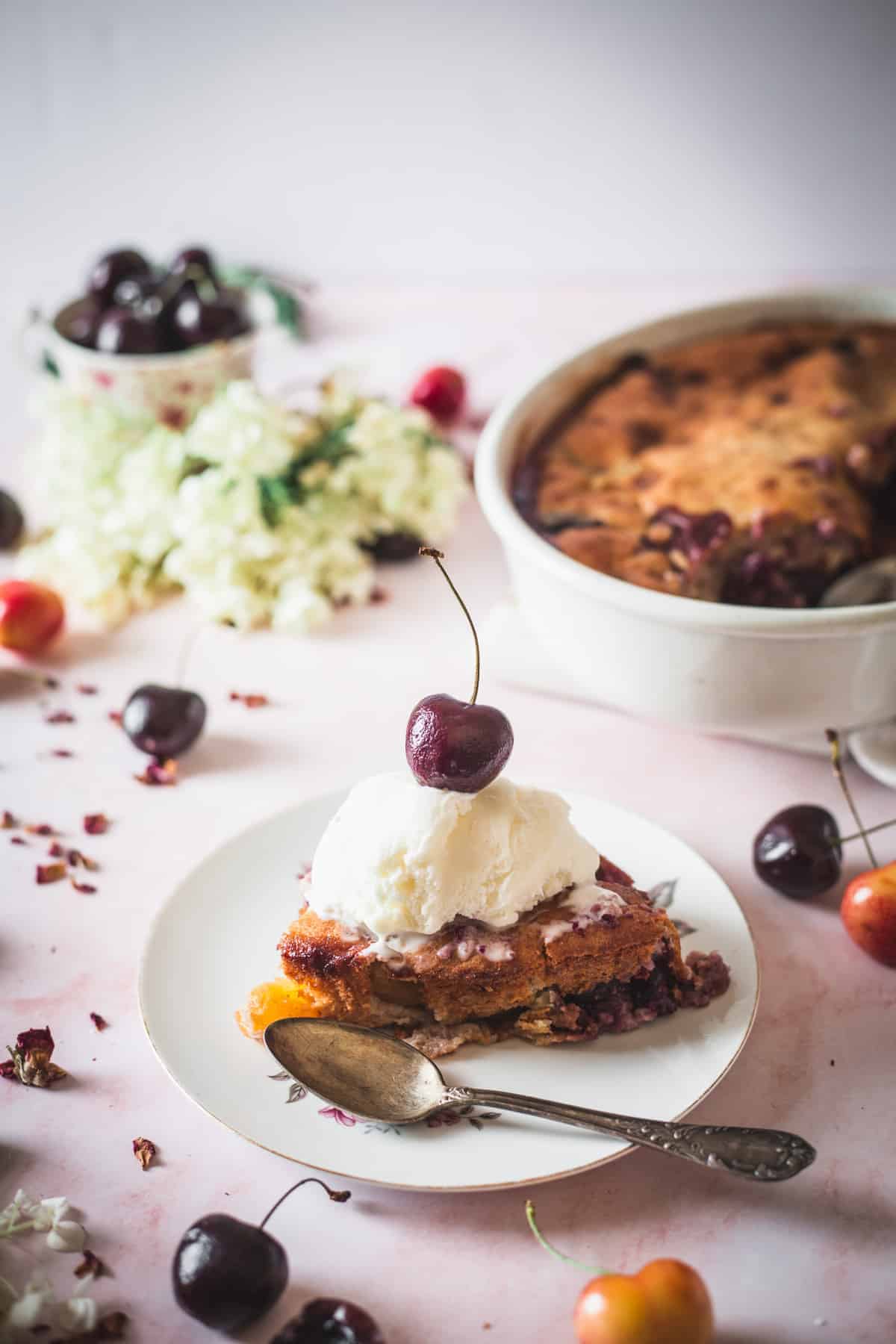 If you love a cherry cobber but can't eat (or prefer not to eat) gluten, this beautiful gluten free cherry cobbler will make you feel like spring with its touches of rose and cherry blossoms!
GF Cherry Cobbler Recipe
Fresh Cherry Almond Galette 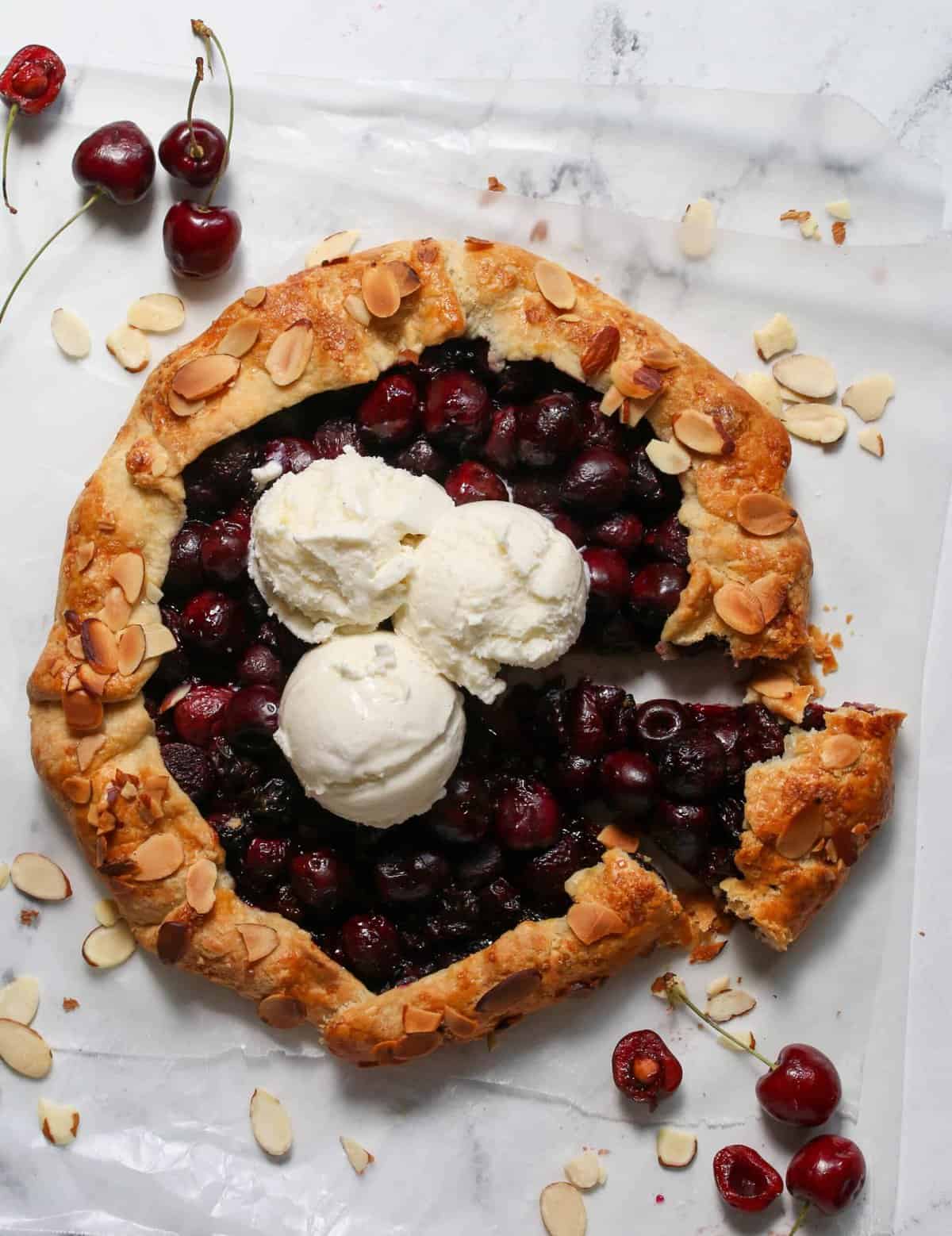 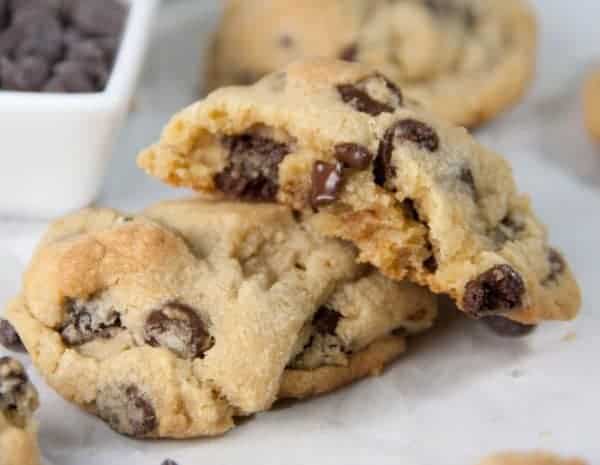