If you find yourself overloaded with spinach, follow these simple steps to freeze them in one of three ways: as leaves, blanched, or as a puree!
Jump to Recipe Pin Recipe

My spinach plant started to bolt, and I needed to figure out what to do with a ton of fresh spinach. There have also been many other times when I bought a large container of spinach, only for it to wilt. Never fear: because, you can easily freeze spinach - either as leaves or as a puree. Super simple, and takes under 10 minutes! Plus, frozen spinach is really just as good as fresh spinach for most things!

📖 How to freeze fresh spinach

Two quick notes before we jump in:

There are three ways to freeze spinach, depending on what you want to use the spinach for.

Rinse your spinach, dry them thoroughly. Pick out any leaves that are already starting to wilt. Place leaves in a freezer safe bag and remove as much air as possible. I love closing it 80% of the way, putting a straw in and sucking out the rest of the air! Throw it in the freezer.

Use spinach within a month if not blanched, or it gets freezer burned.

Blanched and frozen spinach can last up 3 to 4 months easily! But I almost always use it up before then.

If you want to use frozen spinach in smoothies or as a base, make and freeze spinach puree. To do this, blend your washed and dried fresh spinach leaves along with water. I use about ¼th a cup for 15 oz of spinach. 5-6 oz of spinach will fill up an ice cube tray (or make slightly more than a cup of spinach puree!)

Once blitzed, pour the spinach puree into ice cube containers. Throw it in the freezer for at least 3 to 4 hours for the spinach cubes to set. Then throw cubes in a freezer safe bag, and back in the freezer. Smoothie bombs ready!

How do you substitute frozen spinach for fresh spinach?

You often hear this, and it's somewhat true: cooking spinach tends to remove water soluble vitamins (e.g. Vitamin C). However, that mostly happens when you overcook the spinach. As long as you keep the blanching short, you should be okay!

How much spinach will I need to make a cup of spinach puree?

Blending 5 to 6 oz of spinach (so a typical bag from the super market) with a bit of water reduces to about a cup of spinach puree! This made about 16 ice cubes of a reasonable size and I try to use 1-2 cubes per serving of smoothie!

How long does spinach last in the fridge?

Typically, about 5 to 6 days. This is why it's a great reason to freeze spinach when you grow a ton in your garden or get a haul for a great rate from the supermarket!

How long does frozen spinach last?

Depends a bit on the form in which you freeze. Blanched spinach leaves and spinach puree / smoothie bombs tend to last for about 3 to 4 months. If you're freezing spinach without blanching, I suggest using it up within a month at most!

How do you thaw frozen spinach?

Honestly, I never thaw frozen spinach because you can throw it straight into the soup or stew. If you want, you can also thaw it in a microwave or throw it on a skillet on low heat.

Check out these recipes to use your frozen spinach:

📢 Did you make this recipe?!
Please leave a comment and a star rating and let me know how it went! We love hearing from you!! 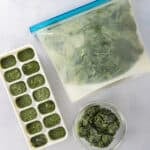 If you find yourself overloaded with spinach, follow these simple steps to freeze them in one of three ways: as leaves, blanched, or as a puree!
Prep Time10 mins
Cook Time5 mins
Freezing Time3 hrs
Course: Side Dish
Cuisine: American
Diet: Vegan
Servings: 6 servings
Calories: 16kcal
Author: Shruthi Baskaran