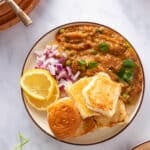 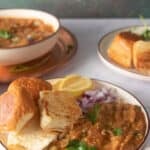 Mumbai pav bhaji is ostensibly the king (or queen) of Indian street food. It’s a great crowdpleaser, a delicious weeknight dinner, and a dish that the pickiest kids will love (I was probably the pickiest kid, just ask my mom, and I loved it). You can make this stove-top or with an Instant Pot. Typically, there’s also sliced red onions and a lemon wedge or two along with a big dollop of butter on top. Is your mouth watering yet? Mine sure is.

The post contains helpful tips and tricks to make sure you’re successful in your first attempt. But if you’re in a rush, please use the link above to jump to the recipe card at the end!

📌 Pin this recipe for later!

While most Indian “curries” are vegetables cooked with spices, there are two things that are special about this recipe:

My recipe is based on a restaurant style pav bhaji, cn easily be made in one pot, and I promise you, it’ll be the only recipe you’ll need. I’ll break this up into three chunks: you’ll need pav (fluffy bread roll) + vegetables (more on this below) and some spices (the pav bhaji masala)

I like to serve this dish with savory or unsweetened bread (try to shoot for something with 1-2 grams of sugar if possible). Any type of potato roll, dinner rolls, or burger buns will typically do the trick. You want the bread to be fluffy and not extra sweet. But in a pinch, almost any bread would do.

It’s all about toasting the bread! As a kid, I remember my dad toasting the pav buns in salted Amul butter. So, I suggest you use salted butter or ghee!) If you’re vegan, use avocado oil or vegan butter! If you’re gluten free, you can use a gluten-free variant of your favorite bread.

If you eat on the streets of Mumbai, most vendors will primarily use onions and potatoes because some of the other vegetables like peas, cauliflowers and green bell peppers (i.e. capsicum) are typically more expensive. So, you can make this dish with just potatoes and onions if you have those.

There are six vegtables that I strongly suggest you use – potatoes, onions, tomatoes, peas, green bell peppers, and cauliflower. This typically produces the taste and texture that’s closest to what you find in India. A couple of notes on substitutions here:

There are three ways in which you can replicate the authentic taste of this dish – using a homemade masala, improvising your garam masala, or using storebought pav bhaji masala. Let’s go through each of them.

This is the recipe I use at home for a simple but authentic masala. I dry roast these spices on medium heat, and then once they’re cool, I grind them up in a spice grinder.

This list is for the basic version of the masala but there are many variants. If you don’t have coriander or cumin seeds, you can substitute with ground versions – 1 tablespoon of ground coriander and 1/2 tablespoon of ground cumin powder. You can also add amchur powder (dried mango powder) on hand, you can add that. Fennel seeds, and/or black cardamom are also used!

The brand I use at home is Everest – which should be available on Amazon or at your neighborhood Indian grocery store. Just use two tablespoons of storebought masala for this recipe.

There are only three steps for making the perfect pav bhaji. The instructions here are written to cover those who don’t have a pressure cooker. If you have one of those or an Instant Pot, jump to the Instant Pot notes section. If you want to make this with one pot, follow first two steps in the same pot.

Cook and mash the potatoes and cauliflower

I typically start with this step because it takes a while. Chop the cauliflower into florets. Peel the potatoes, and chop them into quarters. I like peeling mine before boiling, but you can also quarter and drop them in the water. The peel comes off cleanly afterwards. Add the potatoes and the cauliflower to boiling water with a pinch of turmeric. Boil them for about 20 minutes until a fork inserted into the potatoes will smoothly go through. Mash this up nicely. Then set aside.

Make the bhaji base masala

If you’re making the spice mix from scratch, make it while the veggies are boiling. Otherwise, in a pot or large, deep pan, heat some oil. Add chopped red onions and green bell peppers and saute until brown. Then, add ginger-garlic paste. Saute this for a few seconds until fragrant, add pureed canned tomatoes, and cook on high heat for a few minutes.

Once the tomatoes are cooked, add the potatoes, cauliflower, and peas as well as salt and two tablespoons of the pav bhaji masala. Then, add about 1-1.5 cups of water, and mash all of them together again using the back of a wooden spoon or a masher. Stir every once in a while to make sure they don’t stick. The final consistency should be fluid, but not too watery.

Toast the pav, serve with accompaniments

While the final step of the bhaji is cooking, toast your pav on a pan with salted butter. This is such a key step! I typically slice through the dinner rolls (but not all the way through, so they’re attached at one end). Then I add a dollop of butter, press the rolls with the cut-side down and toast them until they’re crispy (a nice golden brown).

Serve two toasted dinner rolls with some bhaji and a dollop of butter on top. Also serve some cut up red onions, 1-2 lemon wedge slices (which you’ll squeeze on top of the bhaji) and some cilantro as garnish.

For the latter, start by sauteing the onions and green bell peppers on the saute setting. Then add the ginger-garlic-chili paste, and saute for a few more seconds. Then, add all the vegetables and about 1.5 cups of water and pressure cook on high for 8-10 minutes. Release the pressure, turn it back to the saute setting, add two tablespoons of pav bhaji masala as well as salt and mash it all up nicely. Sprinkle with cilantro and you’re done.

If you have extra bhaji, you can store in an airtight container for up to 2 days in the fridge – the flavors of bhaji will actually intensify during this time, so if you want to lighten it when you’re reheating, add a pinch of butter or some water. If you want to freeze, you can portion into individual portions, and freeze for up to 3 months. You can thaw before you reheat (either microwave or stovetop).

If you are looking for other snack or street food recipes, check out: 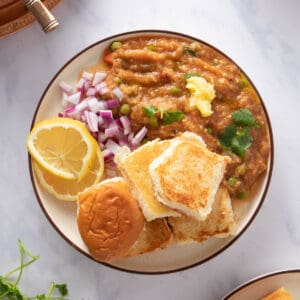 The information shown is an estimate provided by an online nutrition calculator. It should not be considered a substitute for a professional nutritionist’s advice.

Follow me on social!Tag @UrbanFarmie or #urbanfarmie to let me know – I would LOVE to see your creations!
Previous Post: « Crispy Baked Avocado Fries (Vegan and Oil Free)
Next Post: Asian Summer Slaw » 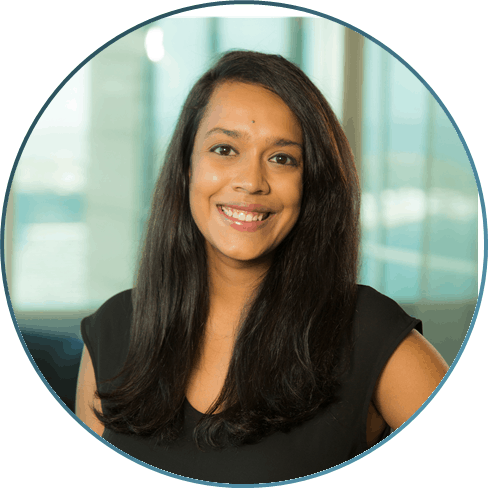 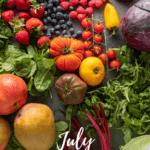 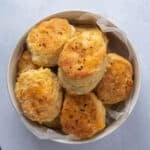 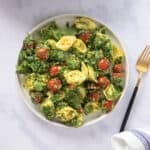 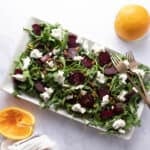 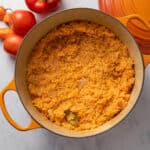 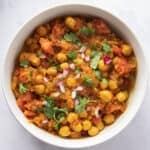 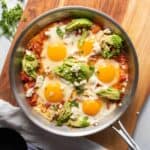 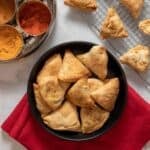 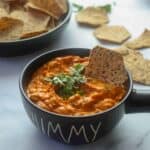 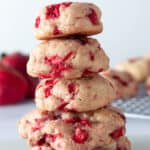